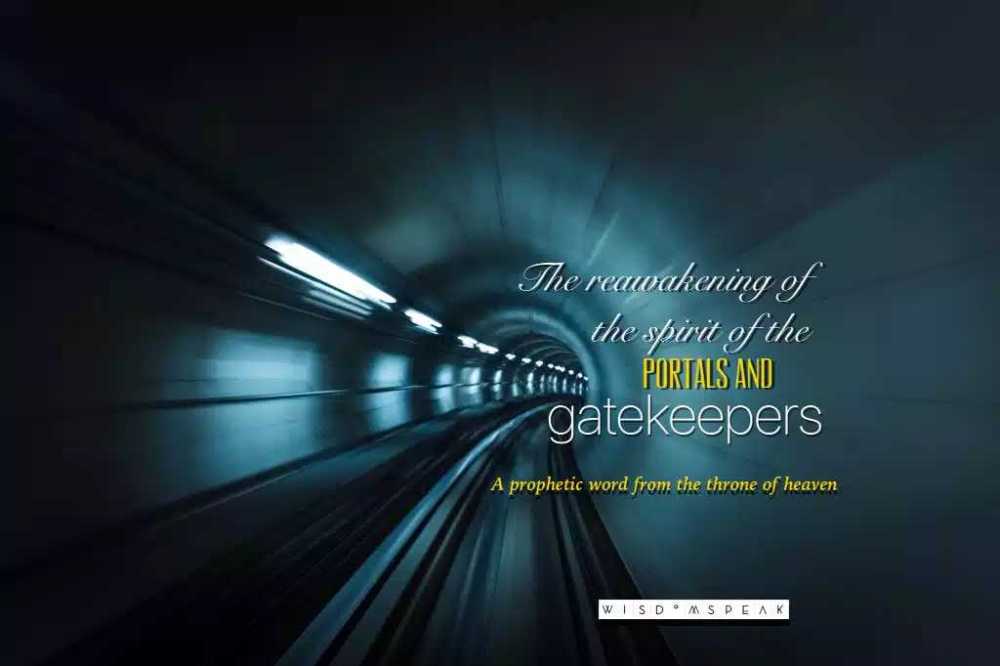 A prophetic word for the church and its watchmen

9 Surely the islands look to me; in the lead are the ships of Tarshish, a bringing your children from afar, with their silver and gold, to the honor of the Lord your God, the Holy One of Israel, for he has endowed you with splendor

My holy one have flown the sky like clouds that have refused to give its rain in its due season. Like the dove to their nest, the clouds of yesterday’s obsolete victory have covered and hid my gatekeepers and watchmen within the nest of their memories of war.

They are hidden away; the gatekeepers have been hidden away for a while now. They have been hidden from the view of men who took for granted the covering of my grace and shield; even from men within my own household, and the nations who are desperately seeking for leadership direction and counsel of peace in times of war.

The gatekeepers are governmental kingmakers in the earth whom the father ordained to be peace-brokers over the seen and the unseen realms of the universe. However, this is not their doing to be quite in the season when it seems their voice is desperately sought for in leadership direction. For it was I, the Lord who seized their voice from speaking.

Yes, the unheard voice and authority of my watchmen and portals was my own doing to reveal the deep corruption taking place within the sanctuary of my people. The unspoken voice and less seen activity of true passionate intercession for a while now is a revelation of how the hearts of my people have turned away from me, and to reveal the degree of how my people have turned to familiar spirit and divination.

I, the Lord called for dryness; a drought in the land when the hearts of my people grew fat and lukewarm over the former gains and provision of my outpouring rain. I called for a famine of my word and true revelation of my speakings when the house of Israel, my church, refused to no longer acknowledge my presence and glory. I brought the wisdom of my portals and watchmen to obsolesce; and the glory of my gatekeepers to a place of redundancy and mockery.

Since no one sought the way to Zion, but allowed the pathway to Shiloh overgrew with wild grass and beast with no one to control them, so I caused my people to depend on what their hands have built and created that their folly and emptiness may be exposed for all to judge.

My people prayed and interceded for their own gain, pleasure, and desire; they’ve mastered the act of using my gift and grace to build a name for themselves. My leaders contest the heart of my people with me; they thrived in the game of falsehood and the emptiness of self-glory. They deceive the innocent and turned the hearts of the Nazarenes to drink wine. My people have lost the passion and hunger for my ways, truth and life desire. Their gain of yesterday’s prayers and intercession have now become the monument of shame and blindness, hindering the very development and maturity of my people; for they say, see what our hands have gained in the place of ‘our prophetic insight and prayers.

While they seem to be spiritually active, yet, their so-called activity is a deep reflection of their, emptiness, fear and insecurity with one another. Their gathering in what they call prayers and intercession brought death in place of life to the camp. Their feast and breaking of bread brought more division and sickness rather than healing and edification to my body.  Their prayers and intercession became a strange fire before me, for I was grieved, and therefore, judged them that they may not be eternally condemned.

My gatekeepers became weary and tired of the perversion within my house.; they therefore became weak and voiceless at their post until they slept off like in days of Lot at the gate of Sodom and Gomorrah.

As my gatekeepers became even more weary and overwhelmed by the arrows of the enemy, so in my goodness and mercy, I called them off their post to myself that they may regain the revelation of my love and that of my Son.  Now, I am reawakening and upgrading the spirit of my GATEKEEPERS as I get ready to redeploy them back to my church across cities and nations of the world. I have been at work within the hearts of my own watchmen as I withdrew them for a season to rest and unlearn the ways of human effort even in the place of self-will prayers and intercession.

I have drained them of the wisdom and strength of religion, traditions of men and the sensuality of an unhealed emotion even in their prayer closet. I have been teaching them about how to perfectly view from a vantage position of a wall once broken, but now restored even with a higher elevation like the LADDER OF JACOB that could CONNECT to TWO realms and realities AT THE SAME TIME.

Many, even within my household have ignorantly written off my gatekeepers and portals as men and women who have lost their place, strength, wisdom and vision into the divine activity of heaven for earth. No, I called them into myself to strip them of their old wineskin which no longer carry the currency and propensity of my present governmental mandate.

The prayers and intercession that was coming from the stream of these weak and tired guards, made my church even weaker and more soulish in their expectation, therefore, I shutdown their interaction and engagement in the heavenlies that Satan my not continue to take undue advantage of my warriors of righteousness.

It’s been a period of dryness and refreshing at the same time as I allowed the season of healing and restoration to pass over them for the regroving of the spirit of my vessels of war.  I have at this moment, set a new platform of interaction, intercession, and interception in spiritual activity over regions and spheres that will ultimately establish the true foundation and pillars of righteousness, peace and joy in replacement of the weak system of humanism and false religion.

Now, I am ready to release this new guards of men and women who indeed understand not just the times and season, but are true leaders in their own rights to give leadership through wisdom for the marching forward of my church as the submit to one another in mutual love and respect for their calling and assignment.

These watchers of the night and the days of men are becoming seasoned doorways of a fresh release of my speakings and zeal, as they through the Spirit of supplication and intercession infuses into my church, the grace and desire to passionately imprint upon the hearts of my saints the will to establish my kingdom agenda in the earth.

I will continually embolden these gatekeepers with courage who are my portals of truth and the custodian of the revelation of the outpouring of my Spirit and prophetic agenda for this season of the end. I will reinforce their forehead with the identity of my [nature and authority] name as I did with Ezekiel and the rest of my prophetic servants who stood against the mouths of lions in their time. These ones will not be weary nor get tired; they will mount up with wings like eagles, they will run and not faint, for my presence will be their covering and canopy.

If you care to know, the eyesight of these company of men has been upgraded with a greater, advanced prophetic vision and inclination to see afar and know that which is yet to enter the thoughts and the hearts of men and the prince of the air. These gatekeepers are now being deployed across the spheres of life with governmental authority to bring the decree of the father to bear over creation.

They are deployed to announce the appointment of fresh governing authority at the gates of all entry points of divine transaction within communities and inner cities. The stirring of the spirit of supplication is now awakening new governmental intercessors who are stirring the heart and passion of the father to see his eternal, kingdom desire become a forceful reality across the body of Christ and within the nations.

Prisoners of hope across the lands are currently emerging with a refreshed sense of destiny, courage and determination for the restoration of the broken walls and burnt gates of nations. The Spirit of the Lord is stirring the Nehemiah’s of this generation as apostolic watchmen and prophetic gatekeepers are taking their rightful place again. The combination of the priestly heavenly watchers and earthly elders are now fast tracking the agenda of the kingdom for this hour.

Here are they who have given themselves no rest until the house of Zion becomes a true eternal habitation for ELOHIM. The order has changed in the heavens regarding the activities of the father for his church and creation, and so men position in the earth must now precisely align themselves to the current, prophetic oracles of the father. There is now a glorious flying out of a truly empowered and renewed company of men and women like eagles, known as portals and gatekeepers of Christ across the airspace of our corporate gatherings and family communities.

There’s now an advanced deployment of well-seasoned, governmental prophetic voice, who are collaborators with highly skilled and creative apostolic blacksmith engineers, with the finest of the spirit of humility, honor, and well matured, wisdom eldership posture, seated at the entrance gates of cities and regions of continents.

The prophetic engagement and collaboration between heavenly initiative and activity beneath the waters of the earth as we saw in genesis is accelerating a divine reformation and restoration of highly matured, tested sons of the kingdom out of the four-head-streams of the RIVERS OF EDEN. Look, here they come, flying with healing on their wings for the redemption and restoration of creation.

Can you hear the flapping of their wings? Can you hear the sound of their trumpet blasting across the clouds of the heavens over men? Listen to the voice of their singing like the sound of many waters flowing from the ALTAR before the father’s presence. See the robs of their humility shining with the brilliancy of the presence of the father as they go forth announcing the speaking and comings of the LION OF THE TRIBE OF JUDAH.

The kingdoms of this world are become the kingdom of our Lord and of his Christ… the portals have been repositioned. The gatekeepers are taking their place again. The watchmen are now watching with a washed, elevated, governmental sight to see afar and prepare the church and the nations for the days of his glorious appearance. It is a new day, members of the household of faith; this is the third day church. A new identity of the gatekeeper’s ministry has been redeployed with an advanced governmental authority to push the prophetic further the initiative of kingdom harvest to the ultimate end. Heaven is recruiting new portals, gatekeepers and watchmen, won’t you avail yourself to this glorious calling?

This is the voice of one under the hospices of Portalsgate resource.